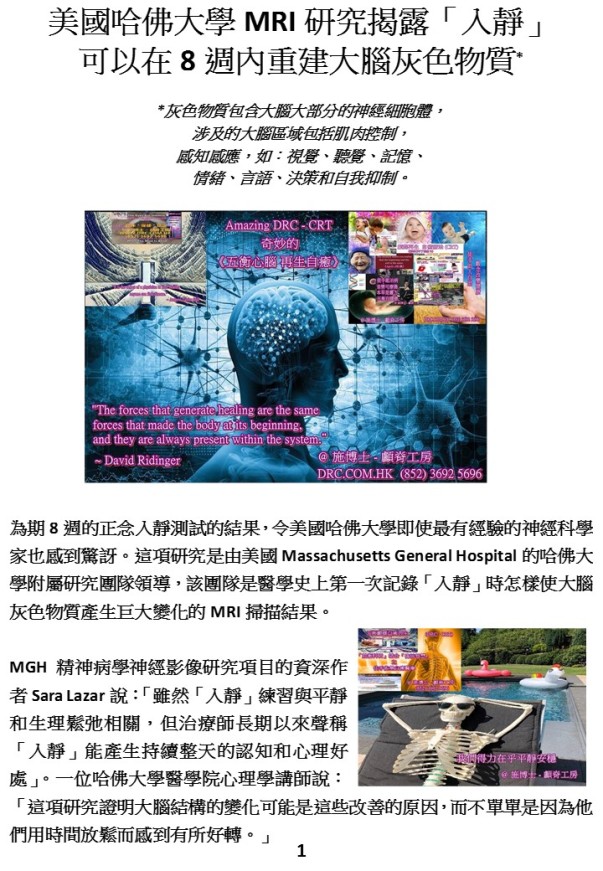 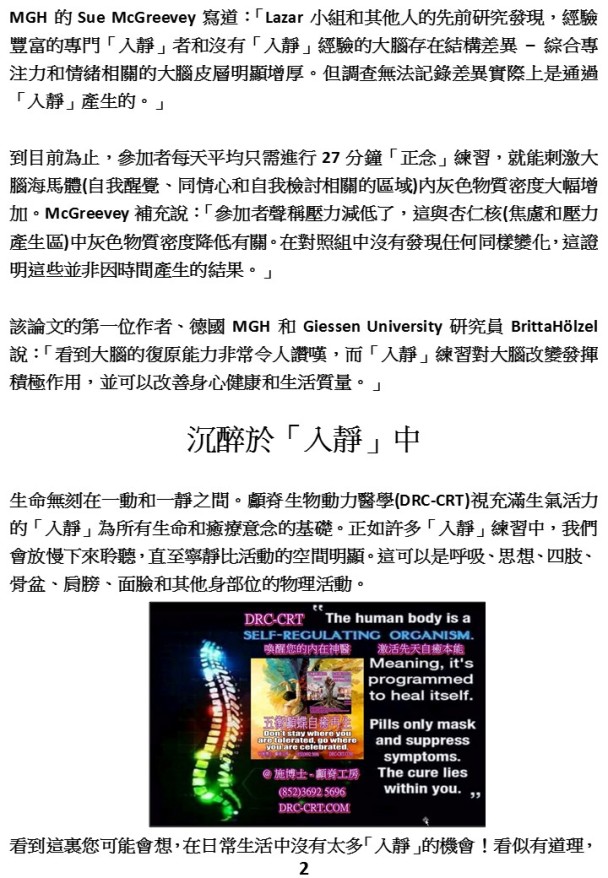 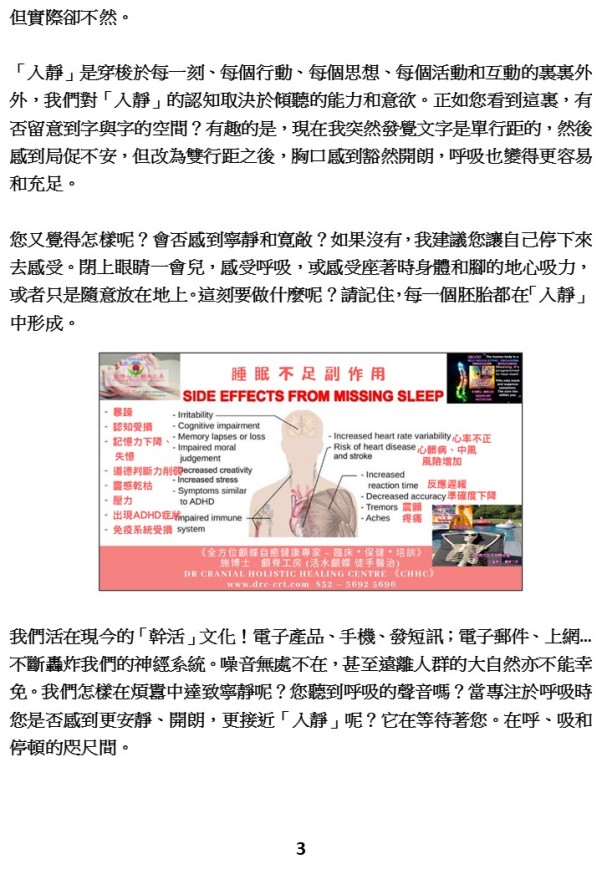 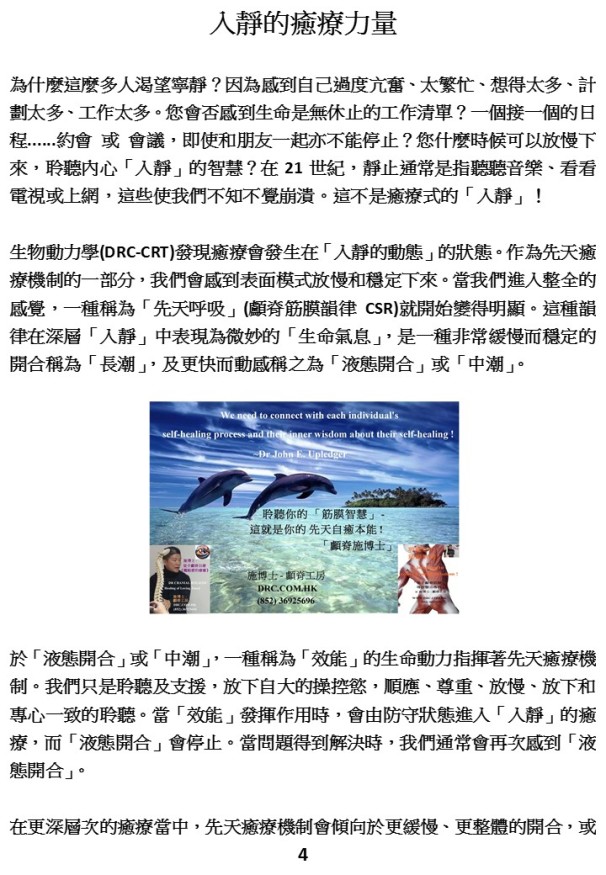 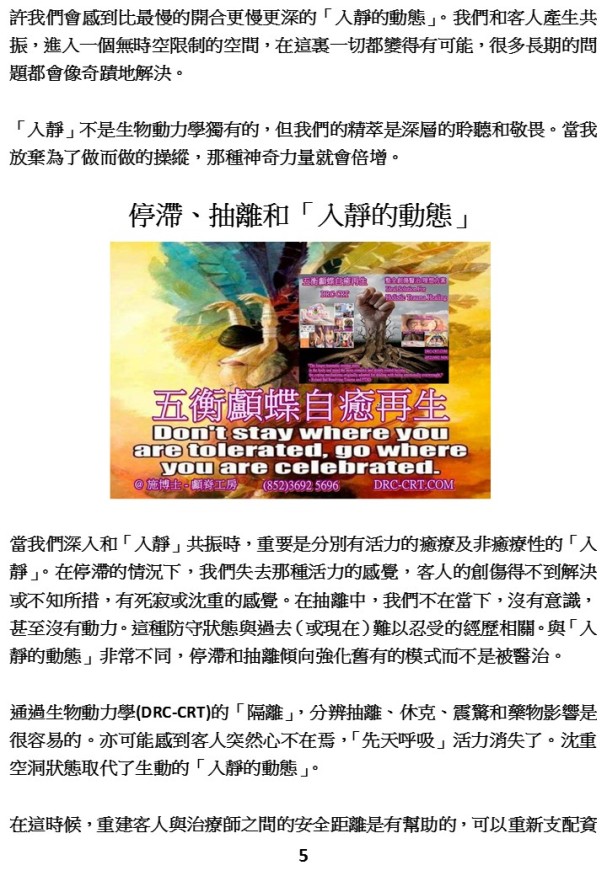 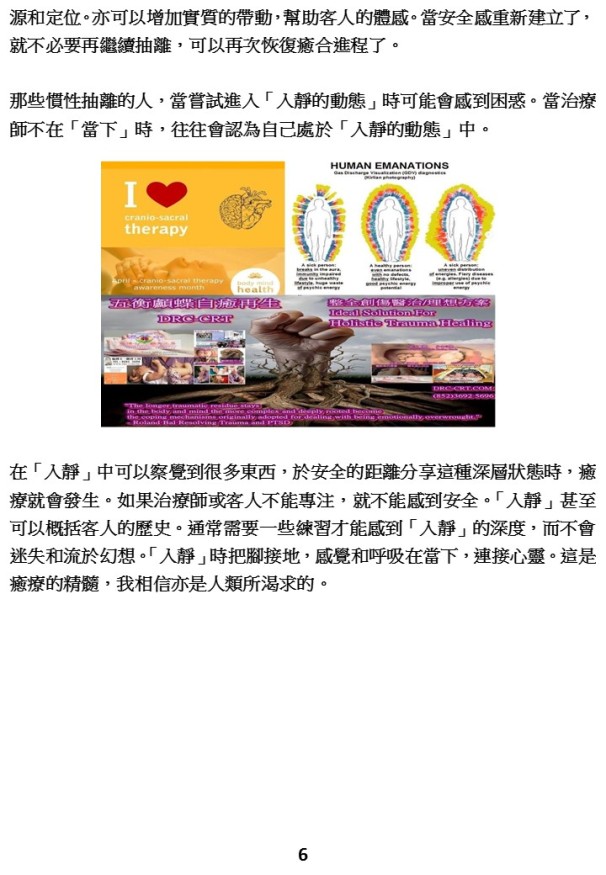 *Grey matter contains most of the brain’s neuronal cell bodies. The grey matter includes regions of the brain involved in muscle control, and sensory perception such as seeing and hearing, memory, emotions, speech, decision making, and self-control.

Test subjects taking part in an 8-week program of mindfulness meditation showed results that astonished even the most experienced neuroscientists at Harvard University.  The study was led by a Harvard-affiliated team of researchers based at Massachusetts General Hospital, and the team’s MRI scans documented for the very first time in medical history how meditation produced massive changes inside the brain’s gray matter.  “Although the practice of meditation is associated with a sense of peacefulness and physical relaxation, practitioners have long claimed that meditation also provides cognitive and psychological benefits that persist throughout the day,” says study senior author Sara Lazar of the MGH Psychiatric Neuroimaging Research Program and a Harvard Medical School instructor in psychology. “This study demonstrates that changes in brain structure may underlie some of these reported improvements and that people are not just feeling better because they are spending time relaxing.”

Sue McGreevey of MGH writes: “Previous studies from Lazar’s group and others found structural differences between the brains of experienced meditation practitioners and individuals with no history of meditation, observing thickening of the cerebral cortex in areas associated with attention and emotional integration. But those investigations could not document that those differences were actually produced by meditation.”  Until now, that is.  The participants spent an average of 27 minutes per day practicing mindfulness exercises, and this is all it took to stimulate a major increase in gray matter density in the hippocampus, the part of the brain associated with self-awareness, compassion, and introspection.  McGreevey adds: “Participant-reported reductions in stress also were correlated with decreased gray-matter density in the amygdala, which is known to play an important role in anxiety and stress. None of these changes were seen in the control group, indicating that they had not resulted merely from the passage of time.”

“It is fascinating to see the brain’s plasticity and that, by practicing meditation, we can play an active role in changing the brain and can increase our well-being and quality of life,” says Britta Hölzel, first author of the paper and a research fellow at MGH and Giessen University in Germany. You can read more about the remarkable study by visiting Harvard.edu.  If this is up your alley then you need to read this: “Listen As Sam Harris Explains How To Tame Your Mind (No Religion Required)”

Life in every moment involves both movement and stillness. In Craniosacral Biodynamics, we perceive an alive and dynamic stillness, a ground of being from which all life and healing intentions emerge. In Continuum, as in many meditation practices, we slow down and listen, until the space between or within the movement becomes more apparent than the motion. This may be the movement of the breath, or thoughts, as well as limbs, pelvis, shoulders, face and other parts of our physical bodies.

You may be thinking as you read this, that there is not much space for stillness in everyday life! So true and yet so not true.

Stillness is within, between and throughout every moment, every action, thought, activity and interaction. Our awareness of it depends on our ability and intention to orient to it. Just now, for example, you are reading these words. How aware are you of the spaces between the words? Interestingly, as I was typing the previous sentence, I suddenly became aware that the text was single-spaced. It felt cramped and uneasy to me. Changing the settings to double-spaced, I felt a resonant loosening in my chest. My breath flowed a bit fuller and easier. How is yours as you read this?

Can you sense the stillness and space even in this moment as you read? If not, I suggest letting yourself take a moment to pause and allow it to inform you. You may want to close your eyes for a moment and just sense your breath, or sensations, or the sense of your seat and feet being met by gravity. Or just be. What does it take in this moment to be? Remember that every embryo arises into form within a stillness of being.

We live today in such a doing culture! Electronics, mobile phones, texting, email, internet, etc. all bombard our nervous systems constantly. There is always noise, often even in nature away from city crowds. How do we find the peace of stillness within this constant chatter? Where is the breath in the midst of the noise? Can you sense it? When you come back to breath, do you sense a bit more quieting? A bit more space? A bit more stillness? It is there, waiting for you. Just a breath away. Just a pause away.

Why is it so many of us long for quietude? We know within somewhere that we are over-stimulated, overactive, thinking too much, planning too much, doing too much. Do you ever feel like your life is an endless to-do list? Or that you have one appointment after another… or date or meeting, even with a friend? When do you get to slow down, listen to the wisdom of the stillness within? Pausing in our 21stcentury too often means turning on the music, television or internet where we can collapse into mindless oblivion. This is not a healing stillness!

In Biodynamics, we perceive healing occurs within a dynamic state of stillness. As part of what we call the inherent treatment plan or program, we sense a slowing down, settling under the surface patterning of conditions and history. As we settle into a sense of wholeness, what we call primary respiration begins to come to the foreground. This rhythmic manifestation of a mysterious presence called the Breath of Life emerges from a deep state of stillness, presenting as a very slow, stable tide called long tide, and a more embodied faster tide we call fluid tide or mid-tide.

Within the fluid field where we perceive the fluid tide, the embodied life force we call potency directs the inherent healing program. We listen and support. We can only do this by letting go of our egotistic needs to do or be in charge. We allow, respect, slow down, surrender and listen deeply. When potency is at work, it shifts from its protective function, to a healing function presenting within stillness. Fluid tide stops while potency does its work. When an inertial or conditional issue is resolved, often we sense the fluid tide starting up again.

At an even deeper level of healing, the inherent treatment plan may orient to slower, more universal long tide phenomena. Or we may sense we have dropped deeper, beyond motion of even the slowest tides, into dynamic stillness. We and the client become one. We enter a timeless zone, a spaceless space, where it seems anything becomes possible. When we emerge, often a number of inertial issues have resolved, often in a seemingly miraculous way.

This stillness is not unique to Biodynamics. What is essential in Biodynamics is this deep level of listening and reverence.

When I let go of my need for something to happen, for my own understanding, for control, for looking like I’ve accomplished something or like I know something, then the magic is augmented.

As we deepen into resonance with stillness, it is important to differentiate between this very alive and healing state and similarly quiet but less helpful states. In stasis, we lose the sense of aliveness as the client’s system orients to unresolved trauma or overwhelm. There may be a sense of deadness or density. In dissociation, we are not present, not aware, not even very alive. This protective condition relates to an overwhelming event or events in our past (or present). Very different from dynamic stillness, stasis and dissociation tend to reinforce old patterning rather than being healing.

In Biodynamics we easily recognize dissociation/freeze/shock/drug affect states by the sense of absence. It may suddenly feel as if nobody is home in the client’s body. The aliveness of primary respiration disappears. A dense or vacuous inert state replaces an alive and dynamic stillness.

This is a time when it’s helpful to re-establish the safety of our relational field between client and practitioner, to reorient to support and resource, perhaps to increase the solidness of our physical contact to support the client in sensing the boundaries of their body. As a sense of safety is re-established, dissociation becomes unnecessary and healing can resume.

Those who habitually reside in dissociation may become confused when trying to orient to dynamic stillness. It is not unusual for practitioners to think they are in dynamic stillness when they are actually just not present.

There is so much to perceive in stillness. Healing happens when this profound state is shared within a safe relational field. If practitioner or client is not really there, it cannot really feel safe. It may even recapitulate the client’s history. It often takes some practice to learn to orient to the depths of stillness, without getting lost or disappearing into imagination. Stillness with our feet on the ground, our sensations and breath still present, our hearts connected. This is the essence of healing and I believe of our human beingness, so often longed for. 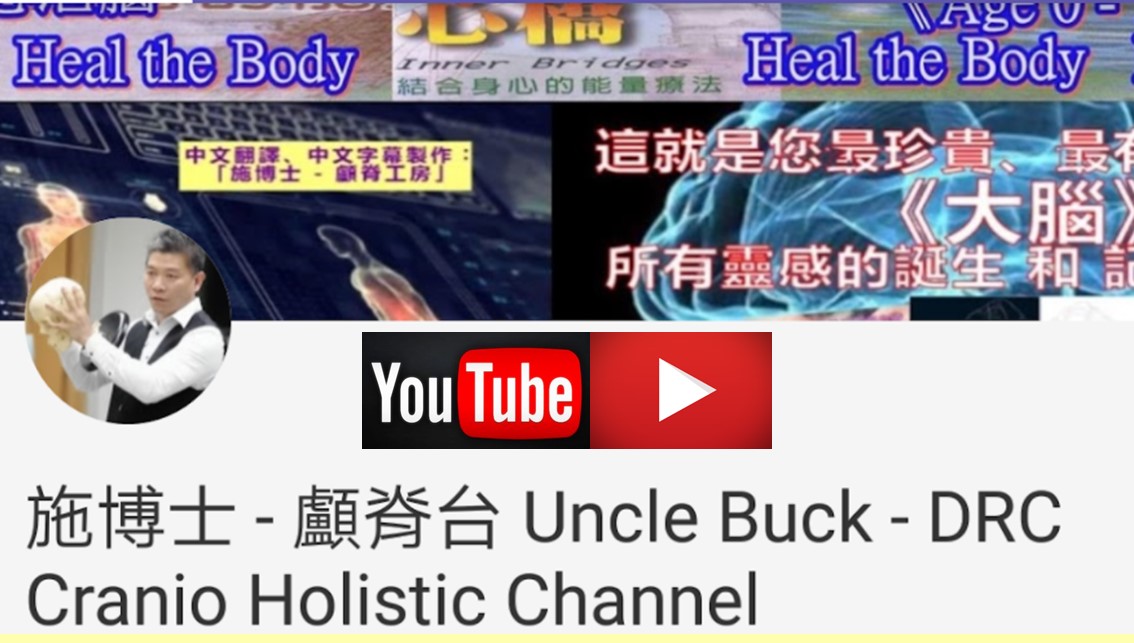 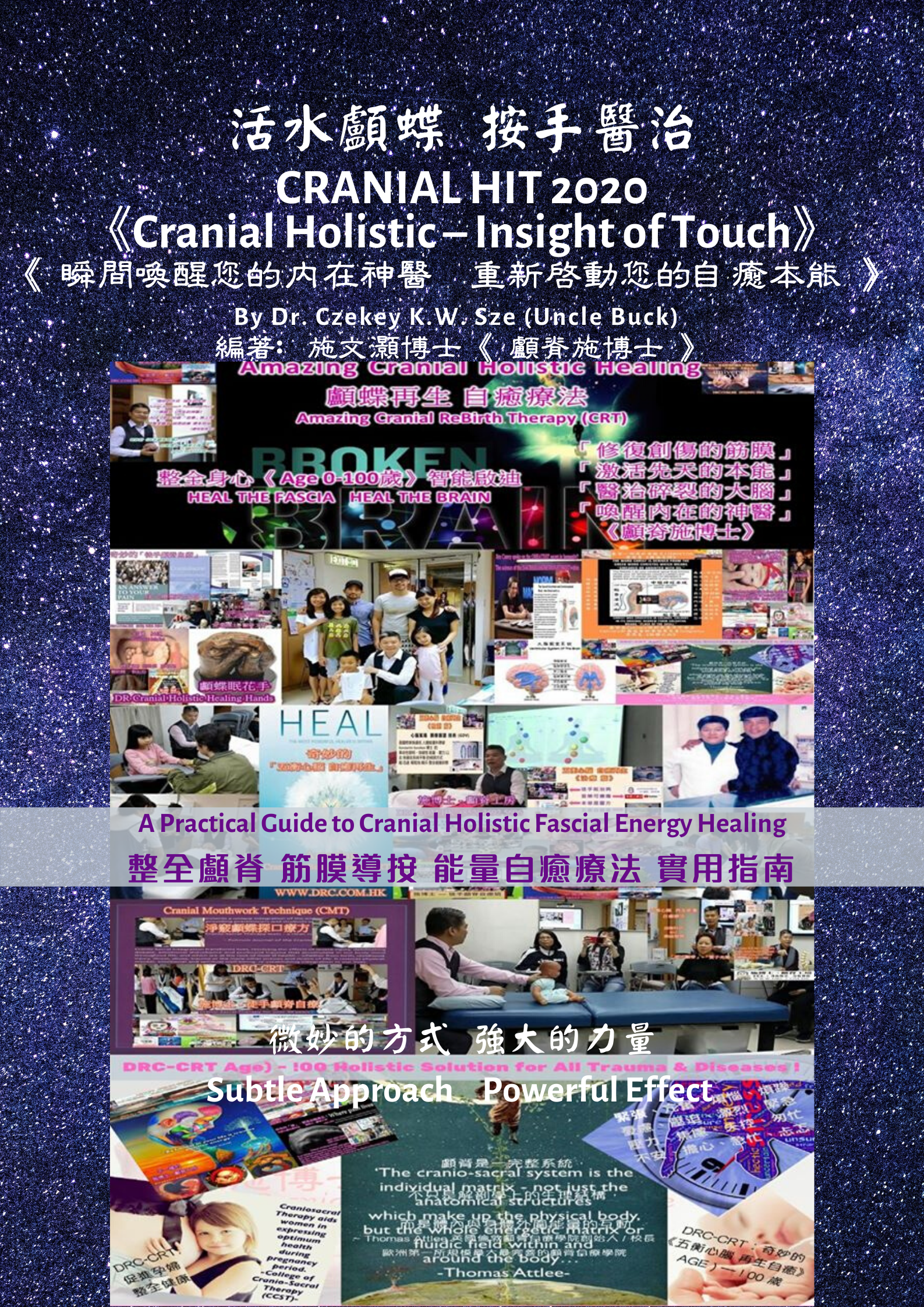